There is a saying in Salento: “Salentu: lu sule, lu mare, lu ientu” (Salento is a place of sun, sea, and wind). Traveling around the world in search of new landscapes, the magical sky, the sun, and the sea of Lecce was the one to magnify Miriam and Lionel Gazzola to take over the revival project of the Palazzo Maresgallo. Reflecting the early Baroque, the works of Apulian artists grace the palace walls and spaces, including a fascinating mural realized by Italian painter, Roberto Ruspoli.

After an enchanté conversation with the owners and artist Roberto Ruspoli, VIA’s contributor, Tatevik Avetisyan shares the story behind the palazzo walls, celebrating French elegance and the creative spirit of Lecce.

Charming Monopoli, picturesque Polignano, and the exclusivity of Savelletri di Fasano… Puglia offers a number of possibilities for hospitality entrepreneurs to grow roots, but the couple chose Lecce for its striking beauty and authenticity. Driven by the effects of innamoramento (falling in love), as Miriam puts it, that strong feeling inspired her and her husband to stay and acquire a palazzo in Lecce. Thus, Apulian hospitality and French entrepreneurship crossroad with a kaleidoscopic sense of genuineness and passion invested in the project.
Palazzo Maresgallo was built in the middle of the 15th century and remains the way we see it today, just as Giacomo Maresgallo imagined it in 1565, the original owner of the palace and a descendant of an affluent family in Lecce. “Architect Giangiacomo Dell’Acaya designed the front side and the portal of the palace, the Serlio’s portal, which was the typical way to express the family’s importance to the city. Together with the balconies, the portal of the palace is the connecting element between the inside and outside parts. Those two elements strongly identify the setting of the front side of the Palace. The portal is carefully decorated; it recalls one of the Porte Rustiche illustrated in the “Extraordinario Libro” by Sebastiano Serlio published in Lyon in 1551, that surely circulated in this part of Italy, Terra D’Otranto, together with architectonic books of that time,” says Miriam.

“…the couple may have left Paris, but the spirit of Louvre and the city’s timeless elegance are undeniably living within the palazzo walls.”

The Experience Inside the Palace Walls

The 2,000 square-meter property is a spacious hideout in the city, offering suites and apartments, and dedicated areas for yoga, spa, and wellness treatments located in an ancient cellar made entirely of Leccese stone. Designing and mastering each corner of the palace, the couple proves that their philosophy is expressed in the concept of Space and Time. The “eclectic memory” of the past and “perception of the present” unite when views to the Duomo and Roman Amphitheatre present themselves on the rooftop. Wandering this artistic sanctuary, it strikes you that the couple may have left Paris, but the spirit of Paris and the Louvre’s legacy are undeniably alive within the palazzo walls.
Security, privacy, and comfort are the pillars behind the hospitality experience, along with private dinners, swimming under the stars, cooking classes, rooftop yoga, private chauffeur, and wine tastings organized upon request. Protected by the palace walls, guests can wholeheartedly feel the power of the couple’s love for art and detail, culminating in this contemporary luxury concept which they brought to light.

“We believe that adapting to this new age of hospitality will help us to see that besides the room where the guests sleep, the whole atmosphere around them can transform the experience from beautiful to WOW.”

Lionel is the technical mind since he is the family bearer of “the art of renovating important buildings,” and Miriam follows her life passion for art and art de Vivre. Their strength lies in three common characteristics: art, voyage, and exclusive palaces. Hence, approaching the task of infusing the Apulian spirit into a historic palazzo was not an unattainable vision for them. For the interiors, Miriam decided to collaborate exclusively with Apulian artists who could reflect the region’s spirit at its finest and incorporate local materials for the construction.

The list of Apulian artists is impressive: Fernando Spano, Tonio, Victoria Episcopo with her mesmerizing flower tables (also one of VIA’s previous heroes), Kiko Mion, Giuseppe Calò, Monica Righi, a ceramic designer for the Home Collection Ilaelaluna whose goal is to requalify territorial ceramic with an ongoing project named “Moreschi di Puglia”; the list continues with additional emerging and well-known artists who contributed to creating the Leccese experience. While everyone was still in lockdown in the last days of 2020, Roberto Ruspoli, a well-known Italian artist, embraced the silence and designed the mural of the palace.

Roberto Ruspoli and the Art of the Stroke

From technology to hospitality and the creative industry, genius is in simplicity, and so is Roberto Ruspoli’s knack for drawing. “When I was a kid, I was crying, and my mother didn’t know how to make me stop. She realized very soon that the only way to make me stop was to give me a pencil and a piece of paper so I would start to draw.” Drawings of Cocteau, Greek vases, and Herbert List’s photographs are what Roberto likes the most when it comes to his research and inspiration. “I am inspired by harmony, which I recognize immediately.”

Although born in Italy, Ruspoli confesses that his heart belongs to Greece while his mind reasons in French, yet there is something about his native land that connects him to Italian culture. Here in Puglia, this cultural intersection makes perfect sense. In fact, finding a piece of Greece in Puglia, in the ancient cities of Taranto, Ostuni, and Lecce, offers the artist great solace, with relics that date back to the 8th century B.C.

“When a good work of classic art is achieved it becomes timeless.”

“When I look at the Greek vases, like in the Platonic myth, I see ideal shapes that exist out of the material world, and then through the material world, people try to grasp onto it as close as they can. The idea is always there intangible and not immersed into the material. It is about looking for a vibration that resonates within you and recognizing it,” says Roberto.
Born in Switzerland, raised in Italy, lived in London, worked in New York, and now residing in Paris, for Ruspoli traveling is deeply rooted in his works. Yet, despite all that he has seen, Ruspoli draws with the same approach as when he was a kid.

He is no stranger to Lecce, though; he used to live here, precisely in front of Palazzo Maresgallo, and it was a fateful moment when the time came to be part of the mural painting project. “My work is more evocative rather than narrative,” explains Roberto, “When I do images, I am not thinking of telling a specific story. I am mainly concerned by the way that my line covers the surface rather than what they want to say, and then, of course, it is more evocative. When I did Palazzo Maresgallo, I wanted to evoke the feeling of classicism but also touched by a human aspect which you find very much in Lecce, in Baroque. It is a more human Baroque, more poetic, fragile, and naive in a way; there is some innocence about it. I wanted to grasp that kind of purity but also evoke a dance that refers to the typical dance of Puglia and also the Greek dance. The two elements that I wanted to put in the first part are the moon and the sun, which refer to the day and the night, the never-ending dance. It is the feeling of joy that I wanted to communicate.”

The wondrous architecture and the wide-open sense of space that grasps the beautiful sea of Lecce fascinate Roberto Ruspoli; he reads in between the lines, as Puglia is a poem to be absorbed: “You can feel that this culture has been in contact with the sun for a long time and it is a poetic thing, a state of mind.” Ruspoli hasn’t stopped working for a second; he has just finished the Soho house in Paris and is starting three new projects that he will soon share.

Apulian hospitality is a concept that is hardly described but closely felt. There is a distinctive mix of feelings and culture that merges with the welcoming nature of people living in this region. As the recent situation in the world has reshaped the operations of many spheres, including tourism and wellness, entrepreneurs and corporations are looking towards the future with hope for its soon revival. Lionel and Miriam Gazzola are no exception; taking their time to prepare the palace and patiently waiting for the pandemic to bring back the “new normal”, they are working hard to launch their project soon.
Palazzo Maresgallo will be launched with a solo exhibition of a well-known photographer Uli Weber, who occasionally references Salento in his works. While we wait impatiently for flights to resume their tempo and for Palazzo Maresgallo to open its doors, you can virtually wander the interior and the atmosphere of the palace with us.

The soundtrack we would hear by the pool:

From Gravel Quarry to Community Hideaway 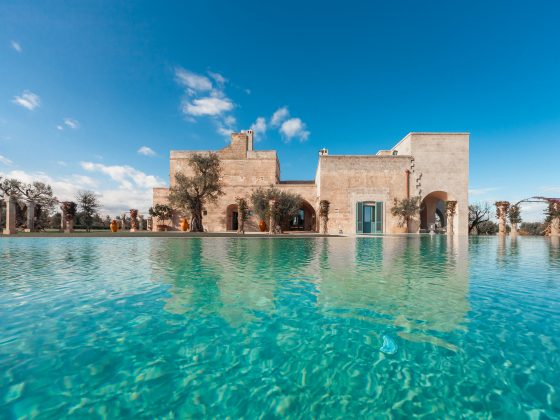 Property of the Week: Palazzo Margherita 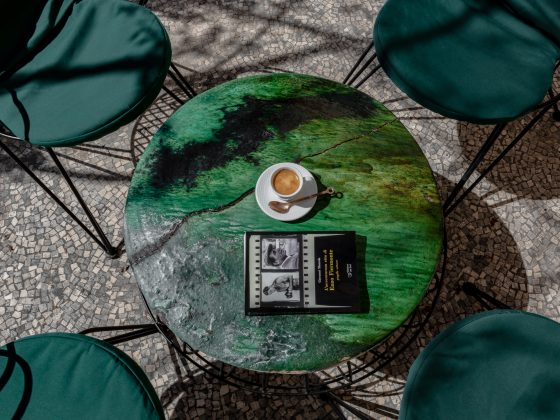 Property of the week: Masseria Lamacoppa