Some children don’t quite know what they’ll do when they grow up until they discover a spark in their soul. When 13-year-old boy Cosimo Vinci attended “The Golds of Taranto in the Hellenistic Age” exhibition in early 1984 in the Mediterranian city of Taranto, he had not realized that it would have a powerful impact on his future career. Bewitched by the Tarantini goldsmiths and the carefully displayed jewels, he decided to become a jewelry designer. We should all be thankful for that fateful visit. Here’s why.

“Creativity is our hope.”

With years of professional experience in the industry, Cosimo Vinci has curated a rich portfolio of works that includes collaborations with Donatella Versace, Balmain, ElleTime, and celebrities such as Jennifer Lopez, Nicole Kidman, and Carolina Marquez who have been seen wearing his jewelry. He has already published two books on jewelry design, and when he’s not at setting diamonds into place, he is busy art directing and creating designs for watches and product packaging. 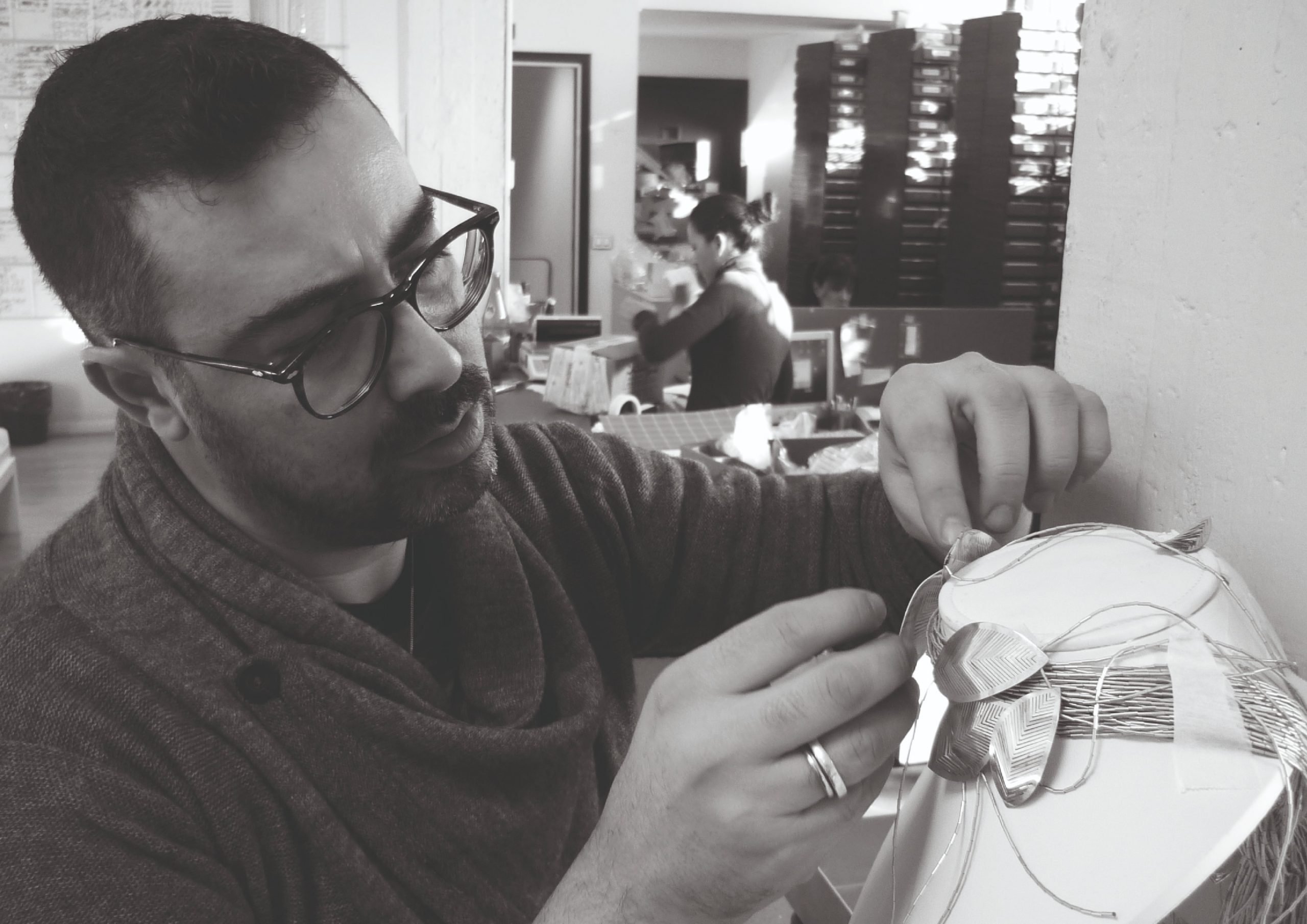 His curiosity and high ambition push him to continuously experiment and intercept new artistic languages. “My way of operating is to anticipate new needs by giving a special place to teaching values and artistic subjects that encourage creativity, which is a distinctive attribute of the human species,” says Cosimo when speaking of his motivations in a professional setting. All his works are showcased on his website called Cosimo Vinci Design. 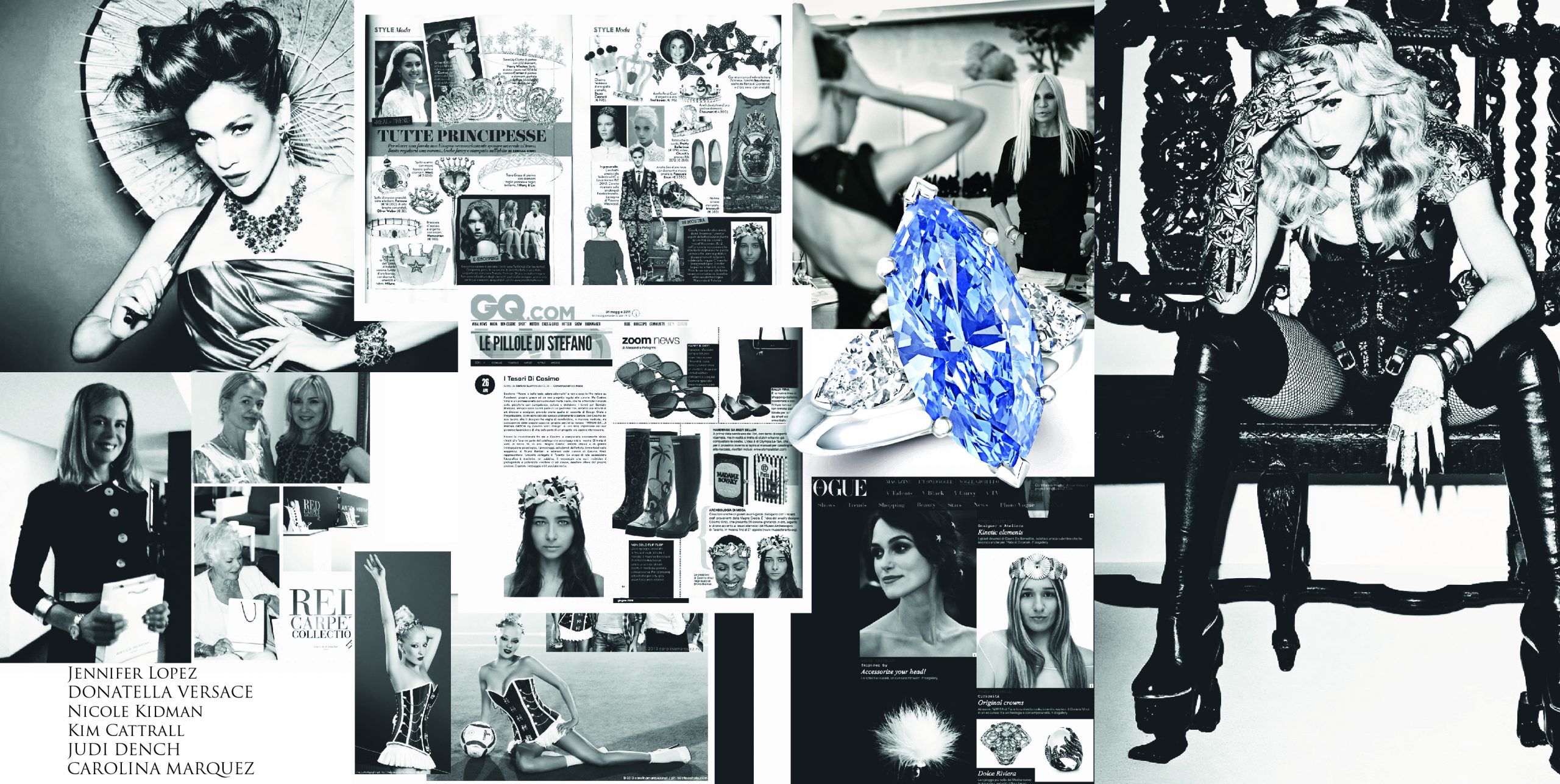 What are your favorite tools, techniques, and materials in jewelry design?

“Gold in all its shades, natural colored stones, embossing, and chisel.”

Do you have a most treasured item from your jewelry collection?

Vinci admits to taking inspiration from the influence of his hometown, Taranto, and it’s no wonder. Puglia is one of the richest archaeological regions of Italy, and Taranto in particular was an ancient Greek city of high importance with incredible relics. A coastal port city referred to as ‘the city of two seas’ (lying between the Big and Small seas), Taranto has a long history of settlements and conquests by various kingdoms and ethnic groups that include descendants of Sparta, Romans, Berbers, Spanish, and even the French. This explains the city’s rich collection of precious metals housed in the Marta National Archeological Museum of Taranto. 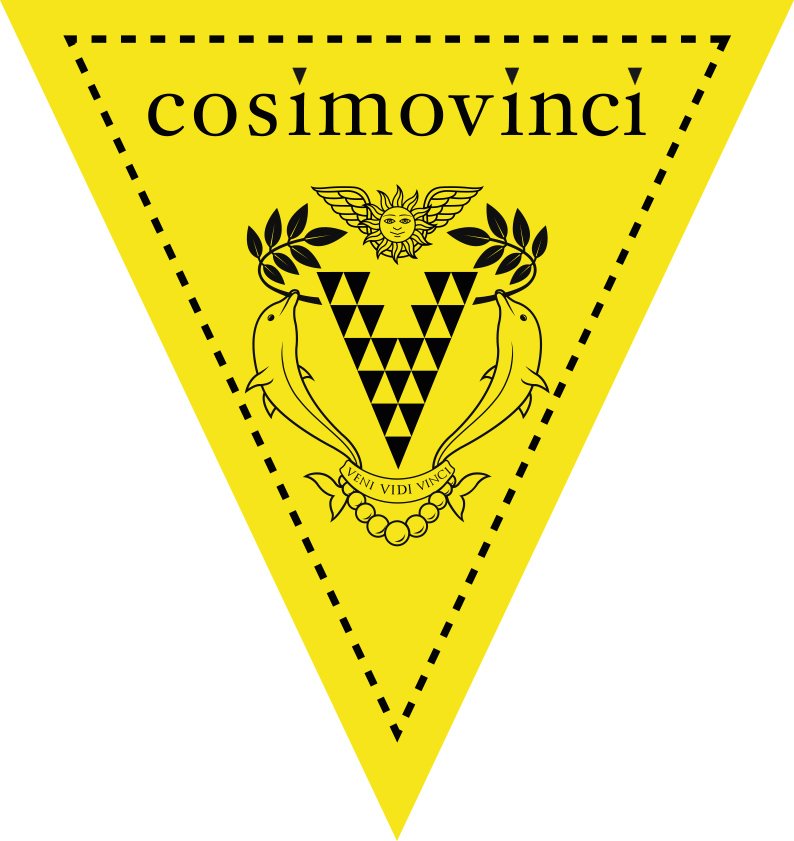 “For years I have been involved in the study of the famous collection of crowns from the contexts of Taranto and the Greek territory; all my new productions rather than interact with the territory, they study it, reinterpret it and offer new interpretations,” reveals Vinci. The local influence can also be traced to Cosimo Vinci’s logo, a homage to his land where he connects Puglia and Ancient Greece referring to vital elements of the earth. In the center of this V-Prism design is a winged anthropomorphic sun representing cosmic intelligence; the two dolphins at either side reflect the divinity of Ancient Greece and the balance of two equal forces as they face the same direction. In the mouth of each dolphin is a twig of myrtle from Taranto, his native city. The two dolphins are connected to a bejeweled banner that reads the famous words of Julius Caesar, “Veni Vidi Vici”, mentioned with an ironic implication in reference to Cosimo Vinci’s last name and the successful outcome of his works.

The contemporary Puglia excites him equally – Lecce, Ostuni, and Polignano a Mare make up the list of his favorite places. Vinci refers to Lecce as the ‘jewel of Baroque art’ because of its open-air museums filled with historical masterpieces. Every curve and ornament beg to be immortalized in the eyes, hearts of those who witness it, and in the designs of contemporary talent. Dressed in white, Ostuni’s architectural aesthetic is a ‘real feast for the eyes’, while Polignano a Mare stands out for its sea caves and the remains of Roman domination.

Vinci’s passion for developing the jewelry industry in Puglia – and handcrafting across the region for that matter – is traced in his dream to establish a crossroad for spheres such as art, culture, craftsmanship, tradition, and technological innovation for Millenials to immerse in the ‘House of Creativity.’ Vince sees great potential in investing in gold and craftsmanship as an economic and social engine of the region by focusing on education.

His first step to opening a jewelry academy in Puglia was to write the first volume Designing Jewelry. From sketch to professional rendering with the designer Manuela Brambatti published by Ikon Editrice. “The first volume of this two-part series provides a step-by-step guide to the fundamental aspects of graphical representation of a wide range of jewelry, from the simplest to the most complex shapes. Different volumes, spaces, surfaces, and finishes are explained in detail, as well as methods for depicting different materials, from timeless metals to stones”, explains Vinci.

He takes his work and role in the Apulian jewelry design industry very seriously (yes, there is one); it’s not just about designing but creating an impact that’s designed to last. Vinci associates the vocations of jewelry design and Art Director with that of a teacher of goldsmith design and the design of fashion jewelry. “It is a natural evolution of a repertoire of knowledge that, following the daily practice of designers, is transferred to young people as a consequence of enrichment of experiences. Their purpose is to start the formation of a generation of educated creatives stimulated by the multiple forms of contemporary communication,” affirms Vinci.

Currently, he is working on a collection of ironic bags called Style Story, made up of seven distinct lifestyles that bear his name – Cosimo Vinci Veni Vidi Vinci. Creating in collaboration with young cartoonists, the collection is an ironic tribute to fashion and it depicts portraits of industry characters with decorated graphics. The collection follows “a Disney ideal of beauty, drawing inspiration from a kaleidoscopic style, between old school tattoos and vintage labels,” explains Vinci. “The material used to create the bags are plant-based vegan fabric, or how we like to say – eco-friendly, and the focus is put on prints and the ‘trompe-l’oeil’ effect along with flower garlands and royal cameos present in the collection.” This new collection will be sold online on Markup Zero.

“My message is clear: don’t let appearances deceive us.”

“My characters hide much more than they appear and sooner or later the fashion world will fall in love with them,” says Vinci with a conviction that is evident in his eyes. In addition to all the projects currently on his work table, and just before he signs off to get back to work, he lets me in on a little secret: he is working to organize an exhibition on “The Archeology of the Future” in Taranto leaving us in anticipation for further details around his current works.

Cosimo Vinci graduated from the University of Bologna majoring in Art, Music, and Performance, and began jewelry design studies first in Florence and then in Vicenza, where he currently resides while teaching at the Fashion Lab Academy in Treviso.