International Art at an Apulian Palai

Today marks the opening of one of Lecce’s most important art events in the last decade: PALAI. An idea conceived by Parisian gallerists, Balice Hertling and Antoine Levi, PALAI brings together an impressive line-up of 40 international artists represented by 8 important galleries in Los Angeles, Tokyo, Shanghai, New York, Vienna, Roma, Tbilisi, Florence, and London. VIA Magazine recommends adding this destination to your itinerary in Salento.

Set in the noble Palazzo Tamborino Cezzi in the historic heart of Lecce, the PALAI collective brings together more than forty international artists in the heart of the city of Lecce, for many of whom this visit is the first time their eyes set sight on the Baroque capital, dubbed Florence of the South. The participants have come together to rethink new approaches to contemporary art in Southern Italy, a region that while rich in architectural heritage, has been largely overlooked for a long period. With PALAI opening in the Salentinean capital, this is now changing.

How was PALAI born?

Palai means “palace” in the local Griko dialect, and yet the word retains a similar meaning in all languages and nationalities of the galleries involved in the project. Antoine Levi notes that it is not only a palace, “but also a welcoming place, a home that opens up to conviviality. We also like the ambivalent concept of this word which reads as an almost slang version of palais, palace in French; acts as a natural bridge between our gallery headquarters in Paris and Salento. Palais in French means not only a palace but also a palate, which is an obvious allusion to the Apulian gastronomy that we would like to include in the experience of our project.”

“An important part of being a gallery owner is to motivate artists to create and exhibit works in the best possible way. Over the years we have always tried to experiment outside the box of the gallery and fairs, with the hope of motivating artists and creating new challenges for the public…Personally, I have always loved Lecce and its incredible architecture that changes color at any time of the day. There is something about Lecce that makes it very welcoming to contemporary art practices. The idea was born from a very natural exchange between Balice Hertling and Ciaccia Levi during a rainy day in Paris. I’m from Puglia, even Nerina – the founder of Ciaccia Levi – is, so there is a lot of staff behind this project and the choice of venue”, explains Daniele Balice of Balice Hertling gallery.

Palai intends to give life in Lecce to a cultural project that celebrates care, generosity, and exchange as the founding values of the Mediterranean identity. The collective’s setting in Palazzo Cezzi adds to the exhibition’s meaning with the historic palazzo an inherent part of the socio-cultural fabric of the city. Throughout the summer Palai will welcome artists, curators, gallery owners, art critics, and collectors in this special venue, in which works by contemporary artists, of various generations, will enter into dialogue and coexist in spaces rich in testimonies of the past offering visitors a unique experience between contemporary languages, history, and landscape.

“As promoters of the project, we believe that sharing and living together in the spaces of Palazzo Tamborino Cezzi can help us reconnect, recharge and collectively explore new directions to take in our respective work practices. Looking to the future and in the long term, PALAI aims to become an annual event capable of promoting unique interactions with the spaces it encounters”, affirm the two organizers, Antoine Levi and Daniele Balice.

There is a unique and genuine energy in Puglia that fascinates. Lecce and Salento are fertile lands where art has always lived, both as a lifestyle and as a practice, it can be sensed and seen immediately. Antoine Levi

An opportunity that is aimed not only at the international artistic community but also at local realities. Palai has activated a virtuous network of collaborations with institutions such as the Municipality of Lecce, the Academy of Fine Arts, and the Lecce-born PIA – a circulating place for artists and curators, a school for the contemporary that offers highly professionalizing paths for artists and curators. Throughout the summer Palai will also promote an agenda of events that will end with Lecce Art Week.

Hertling and Levi, the visionaries behind the PALAI project, obtained the support of Maison Ruinart, the oldest Maison de Champagne, and official partner of the most prestigious international contemporary art fairs, including Art Basel Miami, Art Basel, Frieze London, Fiac, miart and many others. The subtle art of creating the Maison’s Champagne is recognized in its commitment to the world of art, evoking the audacity shown in 1896 when Ruinart asked the Czech artist, Alphonse Mucha, to create an advertising poster that caused a sensation at the time. Since then, Ruinart has commissioned numerous artists, designers, and creative minds to realize their vision of the Maison, always making it contemporary. From Patricia Urquiola to Maarten Baas, from Hubert Le Gall to Jaume Plensa. More recently the artist Liu Bolin, Vik Muniz, and this year the collaboration with the artist Carte Blanche David Shrigley.

“We are proud to be a partner of this initiative that promotes contemporary art in Lecce, the heart of Salento. Maison Ruinart is recognized all over the world for being the Champagne of contemporary art par excellence and for its constant commitment to the protection of the environment and in the fight against climate change”, said Silvia Rosse, Senior Brand Manager for Ruinart. “We could not but enthusiastically embrace this project, in one of the most enchanting areas of Puglia, and toast to the artists and enthusiasts who will animate this unmissable exhibition.” 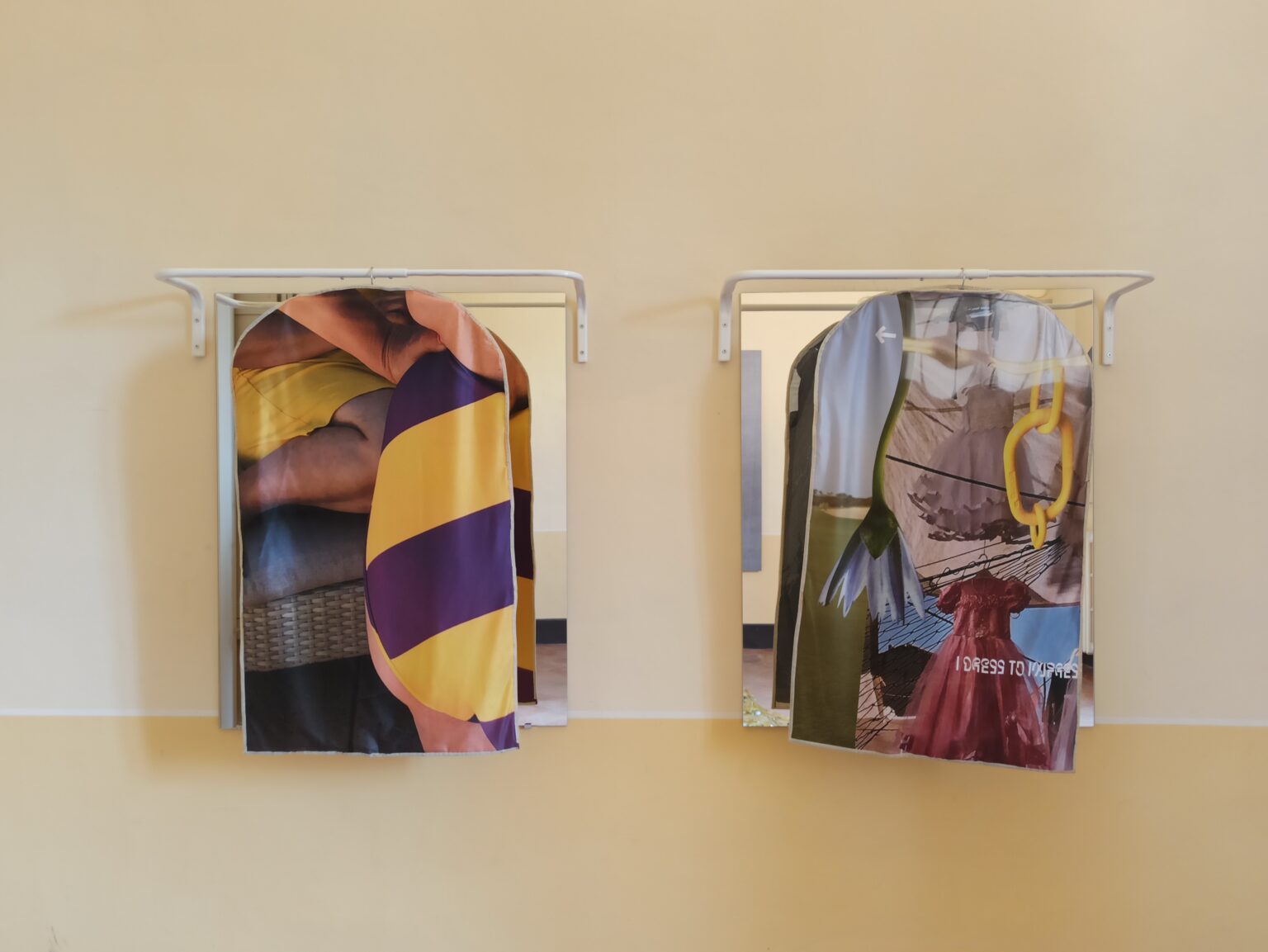 Building a Cultural Container in Lecce

In relation to the territory of Puglia, Balice affirms, “The spirit of PALAI is also to work with local projects, such as PIA – a circulating place for artists and curators, a team of artists and curators that is creating one of the most interesting scenarios in the visual arts of the region. Furthermore, even if Puglia is one of the favorite destinations for international tourism, we believe it is also an ideal place as a cultural destination, to keep the region alive even in winter.”

Lecce indeed is quickly becoming a capital of culture, and Puglia entire is catching the attention of travel, arts, lifestyle, and real estate connoisseurs. There is no telling what’s next although you can sense in the air, a sense of internationalism and open-minded spirits, that the best has yet to arrive.

In the last hall, I meet Bill Cournoyer. I ask him his impressions of PALAI and his first visit to Lecce. “When I was invited to participate I started to do research on Lecce. The first statement I read was that Lecce is the Florence of the South. It seemed a fitting place to stage an unusual exhibition like Palai…I was especially interested in the venue, Palazzo Tamborino Cezzi, a former residence, and its connection to The Meeting’s domestic roots. In addition, I learned that there are many people interested in contemporary art in Lecce and Puglia which I found fascinating and exciting. This will be The Meeting’s first exhibition outside of its “home” space which is my West Village apartment.”

“In art, everything is about the context. I was very pleased when I heard about the quality of galleries being invited. That was an important factor in my decision to participate.” I ask him about the artists he has chosen to participate in the first edition of PALAI. “I am presenting a selection of paintings from an international and cross-generational roster of five individual artists and one artist collaboration: Regina Bogat, Horacio Alcolea Crespo, Alfred d’Ursel, Jutta Koether, Beaux Mendes, and BREYER P-ORRIDGE / Eric Heist.

I feel that Palai offers collectors and art enthusiasts a sense of adventure and aspires to enhance the experience of looking at art in a beautiful and historic space outside of the established art venues and the virtual world we’ve come accustomed to over the last year. Bill Cournoyer

Cournoyer explains the story behind the works on display.
In Regina Bogat’s abstract painting Wuxi, 1994, her signature painted wood sticks provide perspective for the golden yellow landscape she experienced while traveling in China, as well as her appreciation for the Scholar Gardens of Jiangsu Province, which seek to recreate natural landscapes in miniature.
A self-taught artist, Horacio Alcolea Crespo’s colorful and expressionistic landscape is positioned on its side and appears to raise questions of authorship and originality. While Alfred d’Ursel’s painting Untitled, 2020 questions the trust we put into images we are confronted with daily.
Jutta Koether’s Leibhaftige Malerei (red version) (2007), represents an aspect of Koether’s practice drawing upon art historical references and reproduces Sandro Botticelli’s The Story of Nastagio Degli Onesti: The Disembowelment of the Woman Pursued (1483-87).”
Beaux Mendes’s process often begins in plein-air: adolescent woodland, old-growth forests. By assigning and simultaneously denying the attachment of language in their work, Mendes foregrounds a trans-identity that locks meaning as it’s on the brink of resolution.
The collaborative work of the late Genesis Breyer P-Orridge and Eric Heist is based on a new, sequentially ordered, silkscreened gender- indeterminate details of bodies on square surfaces from Candy Factory: pop-infused images and bodies without sex, age, class, or race; a symbol for the one as well as the multiple. The name for the project combines Candy Darling and Factory Records, an overlap of art and music.